A great mentor of mine, Jerry Weinstein, once explained overhead mechanics as a “Ferris wheel mounted on top of a merry go round.” To throw or hit any ball, you have to set up this rotational coil through your trunk (“merry go round”), while maintaining an arch in your upper body to finish the overhead movement down (“Ferris wheel”). This rule holds true regardless if you’re a quarterback, pitcher or volleyball player, because it all comes down to the kinematic sequence. 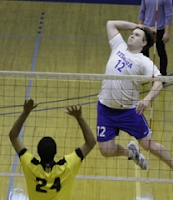 The kinematic sequence is the timing of events that will transfer energy and speed from one body part to another and finally the ball. So these overhead rotational movements always begin with GRF, pushing into the ground to start the sequence. However, many coaches, including myself, have overemphasized this drive portion of the back leg, and subsequent horizontal angle, because this aspect does improve the velocity of the ball.

However, no sport’s official stats measure the ball’s velocity. Sure, pitchers get recruited for lighting up the radar gun and volleyball players look better when they bounce the ball off the ground from a thunderous kill. Even quarterbacks are evaluated on this questionable metric. Andrew Luck’s biggest knock is his apparent lack of arm strength, because he chooses to throw a ball with more spin and less speed. This mechanic causes the nose to actually turn over, making an easier ball to catch, and affect a stat line that actually matters; pass completions.

So we’ll call that back “drive” leg a timing leg instead because the sole purpose of rotation is to set up the performance of the front side of the athlete. Volleyball players need this timing step of the back leg in their approach to the net for adjusting to a setter. Overhead throwers also need this backside to set up their sequence for as much GRF over the longest period of DRIVE, a variable known as impulse. This front side impulse is the true goal of any kinematic sequence, allowing you to maximize both performance (velocity) and accuracy.

However, trying to simplify this kinematic sequence is a difficult task, due to the different body segment lengths within each individual. We use a force plate to assess the individual’s nervous system, a global rationale for how they create rotational movement. Athletes that have too much merry-go round tend have higher initial loading, or LOAD, yet lack the tension needed to stay stiff and upright (EXPLODE). Their counterparts produce large values of EXPLODE, yet lack the DRIVE to sustain such forces, which make them better at the Ferris wheel part of the rotation.

The solution; Merry go rounds need heavier lifting to boost that EXPLODE, and the Ferris wheel needs single leg plyometrics, like the video below, to extend their duration of force production.

2 Lateral Hop from SPARTA on Vimeo.

Always nice to shorten terminology so Jason Sekany at The Pitching Center uses “linear” for Ferris wheel and “rotational” for merry-go rounds. Without a force plate, your coaches or peers can most likely explain which aspect you need more of.