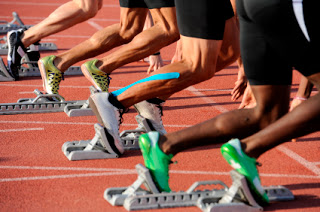 “I wanna go fast!”  Speed is THE difference maker in most sports.  With football season just getting started, it is amazing to see the SIZE and SPEED of the players on the field on Sundays.  Size and speed are the two factors of the game that have changed the most over the last 25 years.  It seems that in order to be a top prospect in the NFL draft, at every position, you must have freakish numbers in these two categories.

The first ingredient for speed is STRENGTH.  Strength in this case should be more accurately defined as the ability to produce force into the ground (relative to bodyweight) – GRF. While size can have positive effects on strength and speed, it really comes down to relative strength and the ability to apply that strength in efficient movement. With proper training, the bigger and stronger you are, the more force you will be able to put into the ground.  This is the foundation for speed, and the ingredient that athletes should spend the most time training for.

The second ingredient for speed is ANGLES. Athletes often come into Sparta wanting to improve speed and sprint technique.  What they are really looking for is the ability to create better angles.  In order to “Go Fast!” you must put force into the ground (GRF) at the best possible angle in order to propel your center of mass forward.

The best way to train acceleration ANGLES is through wall drills.  This “closed” training environment eliminates extra variables and allows athletes to work on putting their body into the right position to produce force into the ground.  Today’s movement education covers the basic progressions and coaching points for acceleration wall drills.

Pool time can do harm to ‘overhead’ athletes

Quick, where is your core?