How to Swing Harder 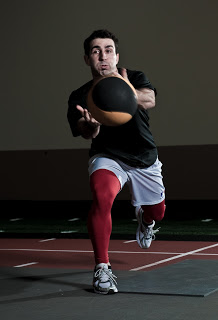 For 50 years in the 15th century, golf was banned in its origin of Scotland because kings felt it interfered with archery and other necessary training for war. But what if golf was training for war? The game poses a large mental obstacle, providing an environment where focus must remain on a small, stationary ball like an archer shooting his foe. With club head speeds in excess of 100 mph, golf is one of the most explosive rotational sports on the planet, which could have helped in warrior’s swordplay. Perhaps, these benefits in battle are why the majority of our professional athletes see golf as their second sport. But whether you are tour players or recreational, what can we all learn from this civilized game that is centuries old?

The backswing is a crucial event of the golf swing, accounting for 43% of the ball’s velocity. Several authors, including a 2010 study out of the University of Pittsburgh, have reported that lower handicap players had significantly greater ground reaction forces (GRF) on the back leg when compared to higher handicaps. This larger GRF can allow a greater X- Factor, which is difference between hip and shoulder turn, ideally keeping your hips stable as your trunk turns backward with the club to load your thoracolumbar fascia. We see this all the time with pitchers who must develop the rhythm of the back leg loading, so they can set up the proper ANGLE of GRF.

Like a rubber band, the SSC allows athletes to produce more power because the stretch of a muscle group can build and release elastic energy to enhance efficiency in the final direction. This SSC is optimized as the LOAD of stretch gets faster. As proof, the 1994 World Congress of Golf found that professional players utilize a longer backswing in less time, to increase their backswing velocity, or LOAD. This LOAD and use of the SSC can be seen in athlete’s ability jump higher with a running start versus just standing stationary. 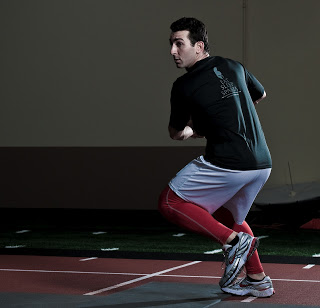 A 2006 study out of the University of Rouen, France, identified the bent knee on the leading leg as a critical factor for the golf swing. This position not only improves the rotation backwards, but this slightly bent leg allows a longer finish through the ball, a greater DRIVE of force production. On the other hand, an excessively stiff, straight leg can abruptly stop rotation, which would both limit accuracy, but also place significant stress on the leading knee’s cartilage. We previously discussed this need in throwing athletes, particularly quarterbacks, to allow a more complete follow through to avoid injury.

No exercise or training can exactly mimic a sport and its timing, nor should it, for fear of interfering with the precise timing of those skills. However, there is a common drill we use for all of our rotational athletes, as they all utilize the X factor; volleyball, quarterbacks, baseball, softball, and or course golf. As seen in this video below, this one movement, can emphasize all the factors so focus on which of the three you specifically need

Side Toss Network from SPARTA on Vimeo.

The sport of golf continues to evolve with more and more athletes, playing a game that can ultimately teach US ALL how to rotate.

Knee Pain? How to Improve Patellar Tracking by Waging War

The Best Hamstring Stretch Ever