“If You Judge a Fish…” – Are Pitchers Athletes? 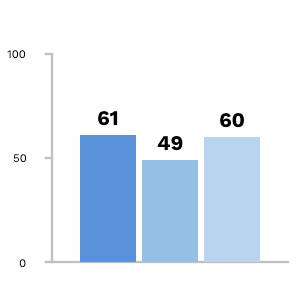 When analyzing human movement, we will see different movers utilize significantly different neuromuscular movement strategies. An individual’s movement strategy, or movement signature, is the result of a summation of many different variables: age, gender, previous injury, genetics, training history, and athletic history just to name a few. As we know, everything matters. By standardizing such a simple low-skilled movement (the vertical jump) for assessment we are able to utilize this across all populations.

Skilled jumpers may perform better if we simply focus on Vertical Jump Height, but when we analyze the quality and relationship of these ground reaction forces we see a much different picture. For example, two different athletes can achieve the exact same height on this vertical leap, but with drastically different ground reaction forces (GRF). After collecting hundreds of thousands of trials of ground reaction force data, we have been able to identify different significant trends as they relate to these variables. But perhaps there is no better example to simplify this concept than a Pitcher in baseball.

We have discussed in previous articles the common “U” shaped movement signature which we will often see in rotational athletes. This relationship is signified by having higher values of LOAD (eccentric rate of force) and DRIVE (concentric impulse) relative to EXPLODE (concentric force) as seen in the image to the left. This relationship wasn’t pulled out of thin air but was something we observed over time in the data we collected from these individuals. Utilizing a homoscedastic assessment and collecting a large volume of standardized data has allowed us to accurately identify different types of movers in a reliable and objective way.

Pitchers are often the butt of jokes for their perceived lack of athleticism when compared to position players, but the truth is they are simply a different type of athlete. Most individuals who are often subjectively characterized as “freak” athletes will often have an extremely high EXPLODE, opposite of we see here with pitchers. But is it the pitcher’s goal to be considered a freak athlete by coaches or peers, or get outs?  To quote Albert Einstein: “Everybody is a genius. But if you judge a fish by its ability to climb a tree, it will live its whole life believing that it is stupid.”

What does the data tell us… 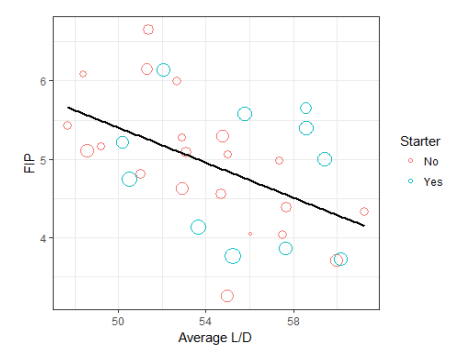 With the global trend of pitchers having higher LOAD and DRIVE, as well as previous analyses of professional pitchers showing these two variables important for pitching performance, we would hypothesize seeing the same trend with college athletes. In a recent analysis (2017) done with the University of the Pacific’s mathematics department, we analyzed GRF alongside pitching metrics of collegiate pitchers over a four-year span to find just that. Utilizing a simple linear model, we see a significant relationship between average LOAD and DRIVE and Field Independent Pitching (FIP) as seen below. More specifically, we are able to predict a 1 point decrease in FIP for every 1 standard deviation (10 T-Scores) increase in LOAD and DRIVE. In contrast, there was no significant correlation between FIP and EXPLODE.

You can read more about the metric FIP by clicking the link above, but essentially FIP is similar to ERA yet “focuses solely on the events a pitcher has the most control over.” Here’s a bit more from MLB.com:

For us here at SPARTA, this result was not groundbreaking and in reality is exactly what we expect to see. The concept is that this rotational signature allows better hip and shoulder dissociation to create a lag of the upper body, and thus a whip. Luckily for pitchers, they are much more often judged by their on-field performance. The fact is that by utilizing a simple holistic movement assessment, we are able to identify different types of athletes or movers based on their force production patterns. But for some, the idea that we are also able to predict performance from a simple vertical jump can be a challenging concept to grasp.

The movement signature is one of the more robust metrics when it comes to analyzing human movement as it not only gives us quantitative values of force production (how much) but also qualitative measures of force and timing throughout different phases of movement. Individuals may produce extremely high amounts of force but do so inefficiently which can result in fatigue or even worse, injury. Sticking with the baseball pitcher as our example, we have found that pitchers who rely too much (or too little) on momentum (DRIVE) relative to LOAD and EXPLODE are 3x more likely to get injured. The ability to be predictive of both health and performance metrics from a vertical jump makes sense if we simply take a holistic view of movement.

To truly understand movement, we must first understand the importance of gravity. Without gravity, everything we know about movement would be wrong. All movements begin with our interaction with gravity and in turn the ground and can be explained by these ground reaction forces. A simple, low skilled, repeatable, practical movement assessment such as a vertical jump, has allowed us to collect a massive amount of reliable ground reaction force data. Utilizing this kinetic data, along with injuries and sport or position specific performance metrics we can analyze and identify what are the key predictors of health and performance. In the age of Big Data, perhaps the greatest challenge we have is confronting our biases and acknowledging what these data tell us.

It is important to note here the difference between being predictive and making guarantees. We are not saying that there are no successful pitchers with different movement signatures (including high EXPLODE), nor are we saying those same pitchers are definitely going to get hurt. For example: there are countless stories of college dropouts going on to become extremely successful (Steve Job, Bill Gates, Mark Zuckerburg), though the stats speak strongly against this being the rule. We have absolutely seen successful pitchers that buck these trends, but statistically speaking, the odds are not in their favor.

Assessing Fatigue 101: The Effects of Fatigue

What You Say is More Important Than What You Mean