Why You Need To Exercise Backwards 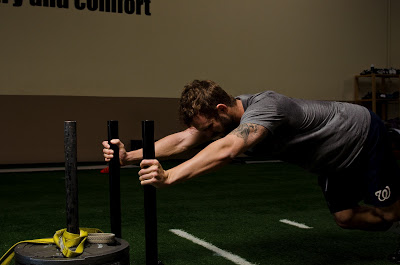 Good instincts are critical for survival, allowing early man to figure out how much faster and less energy it took to drag their kill backwards rather than trying to push. In fact, our primal ancestors did not move forward too much unless they were escaping a predator to run up a tree. Yet why is this backward movement more advantageous? Of course, the most important foundation to start with is the force you apply into the ground (GRF), based off Newton’s 3rd law of motion. For every action, there is an equal and opposite reaction. Following this principle, to move backwards you have to push from the front of the foot down into the ground, almost like you are stepping on the gas of a car.

A 2012 study out of Neuromechanics Lab at Aristotle University in Greece really examined this concept by comparing athletes that trained on a flat surface versus those that trained on an incline surface. The group training on the incline surface increased their jump performance between 14-17% over just 4 weeks! The rationale for this improvement was the increase in gastrocnemius activity by an astonishing 50% during push-off. This muscle, the huge fast twitch powerhouse of the lower leg, is one of major contributors to GRF (see Sparta Point 6/20/12).

However, an inclined surface is usually not easily accessible, nor practical for regular exercise and training. However, there is a similar application to mimic these findings, moving backwards, or at least attempting to, by performing ankle extension, shown to the Right. Just like pushing down on the gas, moving backwards demands a center of pressure through the forefoot (see Sparta Point 12/22/11). This pressure is also the determinant when doing a vertical jump; you actually move backwards to counteract the forward trunk lean/arm swing when performing a jump! Hence the success in high, large calf individuals being able to dunk at will.

The above study used plyometrics, or jumping, but by adding more resistance, like a squat, the movement is slowed down, allowing more contribution from muscles other than just the gastrocnemius. The next major muscle group used to push from the front, or forefoot, is the quadriceps. Physical therapists and coaches have often prescribed dragging a sled backwards as a rehabilitation and prevention movement for knee pain. This prescription makes sense because the gastrocnemius and quadriceps provide great stiffness to protect the knee joint and its cartilage.

The video is shown below; we generally limit distances to 20 yards, emphasizing weight, as it is still one of our maximal strength movements.

Push through your forefoot to emphasize backwards movement, apply FRONT to move back

So before considering joint or muscle dominance, first consider which way you want to be applying force, it can help focus your exercise cues and where you need to be feeling it!

You never know, you might have been the caveman who could not drag home dinner.

Re-post: Is Your Athletic Test Homoscedastic?