How to Complex Your Exercises 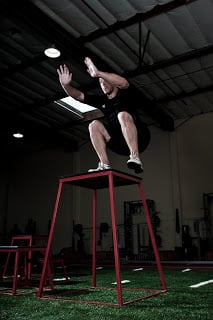 You have probably seen the guy in the gym going back and forth between 2 or more different exercises, alternating sets between each movement. These pairings are often called complexes. In the general population, these combinations are generally aimed at building muscle size or losing fat by providing less rest and higher repetitions. However, since we are dealing with athletic development, we’ll stay focused on complexes that can maximize strength and speed gains. The best way to complex your workouts for these more functional improvements is to utilize post activation potentiation.

In a 2005 study of the University of Victoria, Post Activation Potentiation (PAP) was defined as an enhanced and immediate muscle force output of explosive movements after a heavy resistance exercise. The most basic combination would be alternating a heavy squat with a vertical jump. Our force plates and other studies have shown increases in both RATE and FORCE maximums in jump performance after a heavier lift.

The underlying theory behind PAP is that a heavy load stimulates the nervous system for 2 possible explanations. The first concept is the increased sensitivity of actin and myosin, proteins responsible for muscle contraction, due to the addition of a phosphate to ATP. This phosphorylation ultimately allows greater force production within the muscle. The second possible explanation behind PAP is the heavier lift’s enhancement of the Hoffman reflex, which is an electrical signal from the spine to the muscle. This improvement allows a faster transmission of the nervous system impulse to the muscle, like a faster internet connection.

Other studies have shown some PAP variability between individuals, but perhaps the greatest difference can be attributed to training history. A study by Loren Chiu, director of the Neuromuscular Laboratory at the University of Alberta, found no PAP in untrained individuals, most likely due to fatigue. Therefore, you should build up a tolerance to these complexes to avoid nervous system fatigue, as well as allow enough time in between exercises, at least 2 minutes.

There are several additional ways to start or improve your use of complexes in training. Many programs use complexes as a way to save time, targeting multiple movements in succession so no one exercise gets more attention. For example, if you were to do 1 set of pull-ups, then 1 set of bench press, you can focus equally on the 2, rather than overly focus on one. The only downside is when you aim at multiple avenues; you can end up achieving less. Any experience athlete can tell you a maximum set of pull-ups or pressing needs a much less intense movement, like sitting down or some form of mobility work. However, if your goal is strength endurance or fat loss, rather than maximum strength, this well rounded approach may serve you well.

But if you’re looking to continue to reprogram your nervous system, PAP can be a very efficient and effective way to improve your strength through a heavy lift, simultaneously helping your speed through an explosive jump.

Balance with a barbell, not a ball

A Better Solution for a Big Issue: Core and Upper Body Testing

What do Stress Fractures, Shin Splints and Foot Pain Have in Common?