What Type of Athlete are You?

“What a man can be, he must be.”Abraham Maslow

There is no question that some of us were meant to be exceptional athletes, others scholars or artists of some kind. These potentials can be developed further into areas of focus; engineering professors, poetry for artists, or a skilled golfer in our realm of athleticism.

What has been amazing in our journey of force plate analysis amongst thousands of athletes, is the natural frequency of athletes, either an innate gift or a result of their repetitive, or deep practice to develop a skill (see Sparta Point). The process requires us to look at what you do well in movement, which characteristics outshine the others and could predispose you for success in specific sports or activities rather than others.

The process begins with an assessment of the neuromuscular system; the combination of the nervous system and the muscles, working together to permit movement (see Sparta Point). The movement signature provides 3 variables: 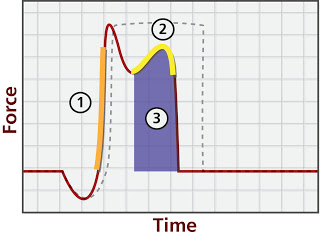 When compared to our massive database of athlete tests (comparison with peers), we can provide a relative performance index for each variable. The relationship between these variables forms a pattern that is correlated with specific directional planes. These planes of movement help us objectively evaluate which sports and positions need to perform better in different variables.

Which Sports are Which Directions?

Athletic movements tend to occur in rotational, vertical, and linear directions. Rotational movements tend to be stationary; golfers and baseball players hit and throw from a relatively fixed position. Vertical athletes are concerned with jumping as high and quickly as possible, such as a basketball player. Linear athletes need to move forward as smoothly and explosively as possible, a common requirement for sprinting speed. While athletes utilize many different tools in their sport, generally they must primarily rely on one of these directions.

The process of enhancing these movement signatures for positional and sport success is always the end goal; the pursuit of all things both injury prevention and performance related. Yet, we must be cautious of “over-specialization”. We know what that means now due to the intense focus of our younger athletes into just one sport or position, eliminating the exposure to a multitude of different movement skills. When this over-specialization occurs, regardless of age, athletic signatures become extremes or weaknesses.

When one variable is at a significantly higher value than the other 2, extreme signatures become the red flag. In these cases, the extreme value dominates the others and becomes the default neuromuscular solution to everything. An example is a basketball player who develops an excessive explode variable shown to the right. There is a decreased reliance of the ankle and quads (LOAD) and diminished hip extension (DRIVE) so the athlete relies purely on the stretch shortening cycle rather than muscular contributions.

Weaknesses tend to arrive when one value gets significantly lower than the other 2. An example here is a baseball pitcher who becomes too rotational and their explode value gets too low (see Sparta Point). This overly rotational pattern creates an injury risk for lumbo-pelvic injuries, as well as performance concerns of losing the linearability needed to direct a rotational movement towards the desired direction of home plate.

The next 3 weeks will cover the 3 athletic planes of movement signatures: rotational, vertical, and linear. For now, just start thinking about what you or your athletes are…

How You Are Leaking FORCE when You Move